All types of waves

All types of waves

For the purpose of this guide, East Bali is categorised from Nusa Dua (even though it is on the Bukit Peninsula, it is best in East coast conditions.) and north, and including the offshore island of Nusa Lembongan and Nusa Ceningan. It is typically a lot quieter than the Kuta and the west coast, with Sanur and Nusa Dua being the tourism centres but it is targeting a more upmarket tourist that that of Kuta.

Nusa Dua is a gated complex that encompasses a series of high end resorts complete with manicured gardens. You will need to drive through a security check if you are hunting for waves around there.

Sanur has a hotel lined beach front that runs from Hyatt Reef all the way to Sanur reef. All of these hotels are more up market hotels. Sanur is where you can catch the ferry across to Nusa Lembongan, and is where the coral reefs and clear water of the south stop and the black sand beaches and more dirty water begin.

North of Sanur all the way up the coast is a little more sparse than Sanur and Nusa Dua, with a lot more space and a lot less accommodation and food options targeted at tourists. A little bit of Bahasa Indonesia can help get around up here, but there are still a few empty waves to be found, although they can be fickle. Keramas hosts a small flurry of resorts, and there are local accommodations and villas to rent scattered around.

Across the channel you will find Nusa Lembongan and Nusa Ceningan, which offers a different orientation to the east coast with the surfing coast facing west and is best in the dry season. The island vibe of these islands attracts a lot of tourists and accommodation and eating options are wide and varied, ranging from cheap homestays to high end villas over looking the bay. These islands also offer world class diving and snorkelling.

East Bali is most famous for the wave at Keramas, 20 minutes drive north of the town of Sanur. Keramas was kept secret until the 2000’s when this wave was sent into the spotlight of world surfing, and now hosts a world tour event! Kommune Resort & Beach Club was built in front of the wave in 2011, with huge spotlights allowing the wave to even be surfed at night.

While Keramas draws the main crowd, there are plenty of spots along this coast and because of the rural setting with little development, those who do their research can often surf alone with no crowd to speak of.

The waves along this coast vary a lot. From Nusa Dua to Sanur is predominately right hand reef breaks breaking over coral in clear water, and north from Sanur the waves change to beach breaks and volcanic rock shelf, which is no less intimidating than their coral neighbours. All these waves are typically wet season waves, being off shore in the west to north west winds.

The Nusa Dua region draws in a lot of swell and very rarely goes flat, but as you head north the Bukit peninsula shelters a lot of the coast almost all the way to Keramas, needing a larger swell to light them up which is uncommon in the wet season. The Nusa Dua region can offer some world class waves in small conditions, and Sri Lanka can light up when it get bigger.

The Sanur area hosts a series of quality reefs, and Sanur reef itself can produce some of the best right handers in Bali when the conditions all line up.

Serangan Island is a swell magnet, and the crowds will pool up there on the smaller swells.

The reefs along the southern east coast are set out from the beach, so be prepared for a long paddle or a long walk over sharp reef at low tide. There is a boat available at some spots for anywhere up to 100,000 rupiah, which can be a good option if you prefer not to surf with booties or would rather save your energy for surfing.

North of Sanur, the sand becomes black and the water becomes dirty as a lot of rivers spill out around here. Keramas is the main wave up here, and will always be the most crowded, but there are other spots around that are not mentioned in this guide, get searching and you may score some rare uncrowded waves. A lot of this coast doesn’t break at low tide, so explore on the higher tides to increase your chances. The rivers can provide good geographic shape to host various waves.

Nusa Lembongan Island is completely different to the east coast of the mainland, with the surf coast orientated to make the most of the dry season offshore trade winds. All the waves here break over coral reef in crystal clear water, and offers something for every level, including 2 rights, 2 lefts and a fun beginner A-frame at playgrounds. 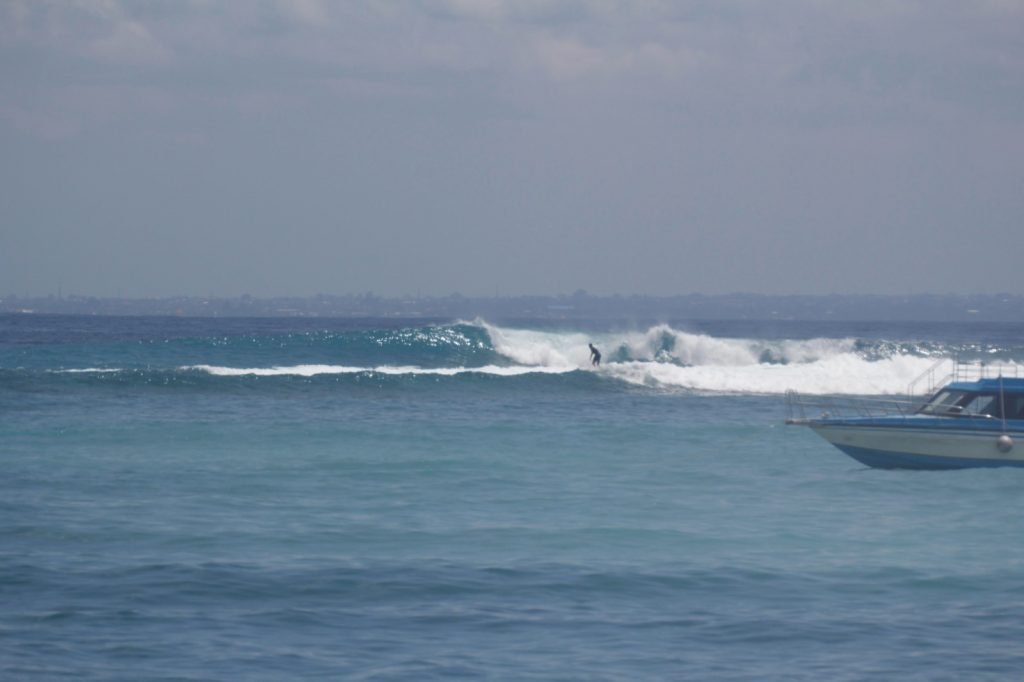 Shipwrecks is a power long right hander that breaks on an offshore reef.
Read more 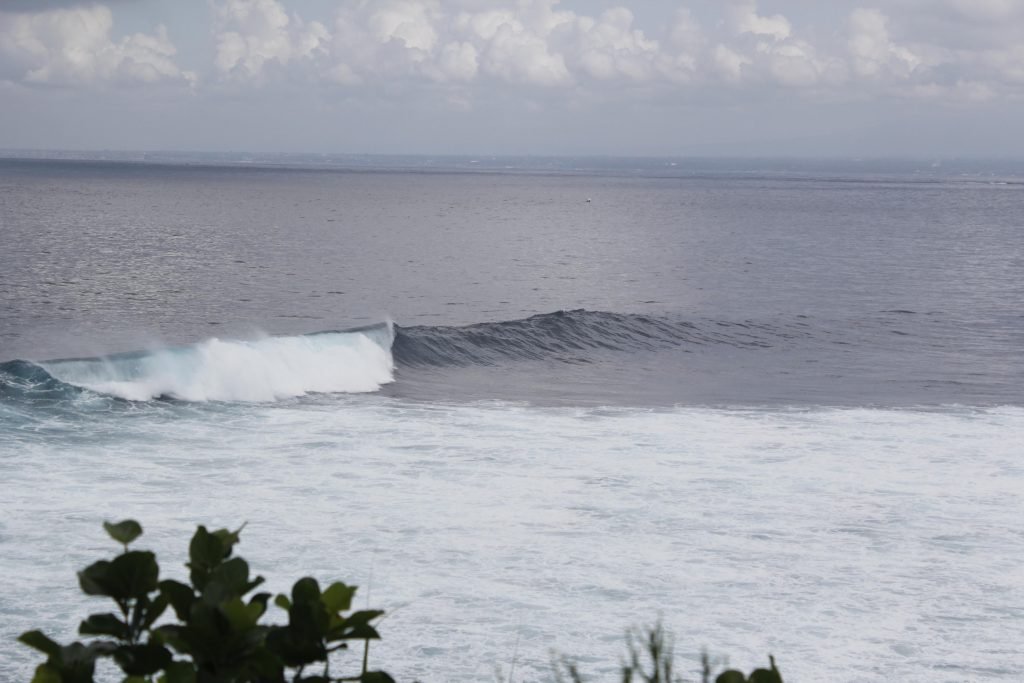 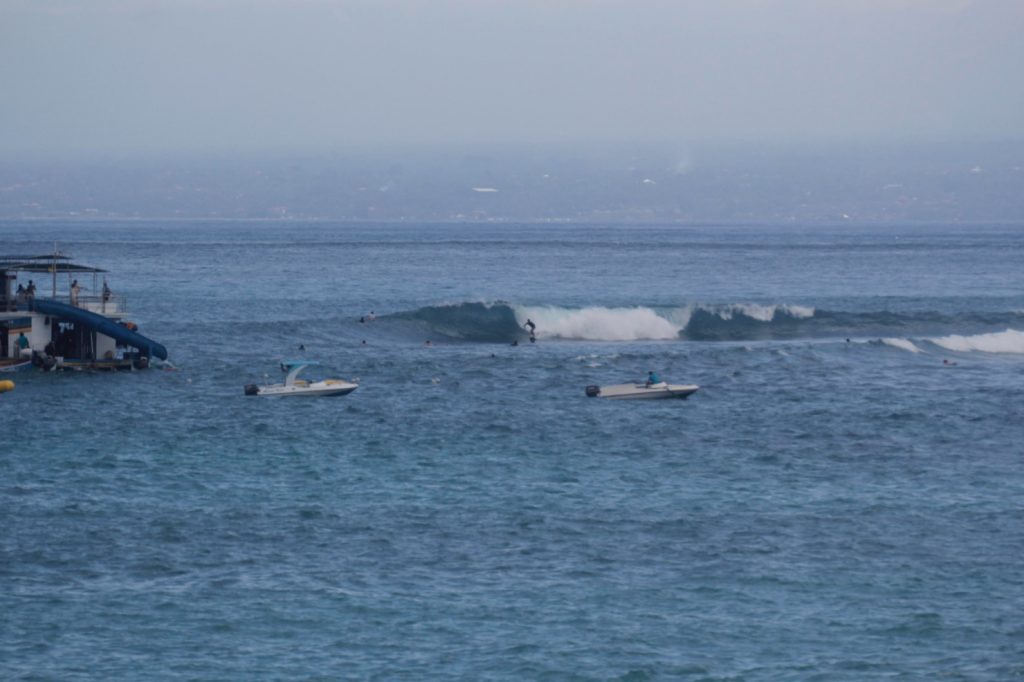 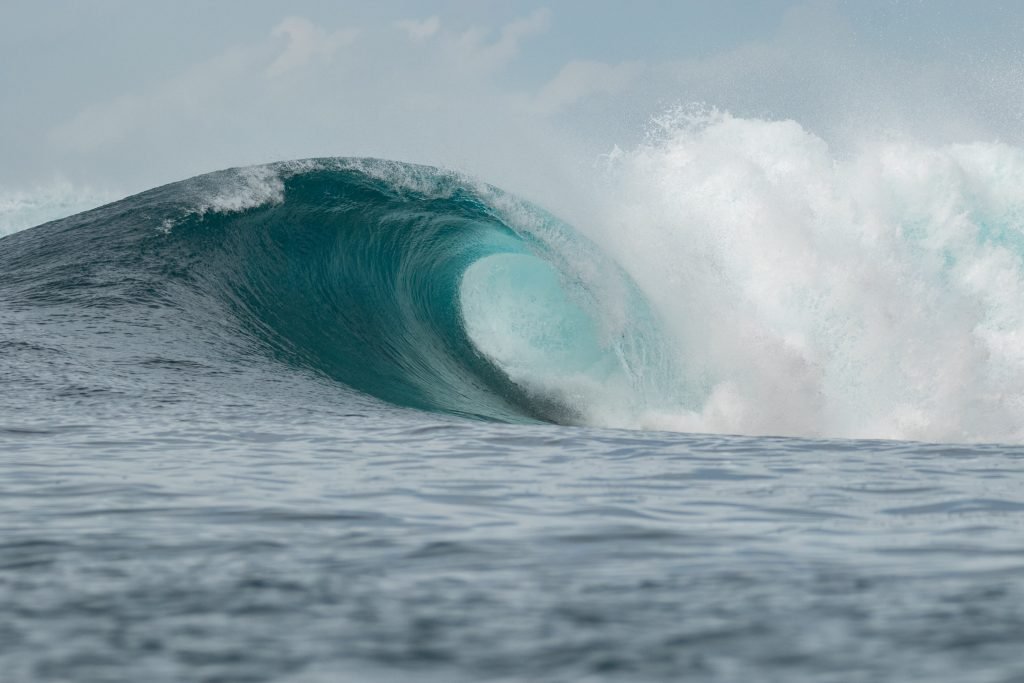 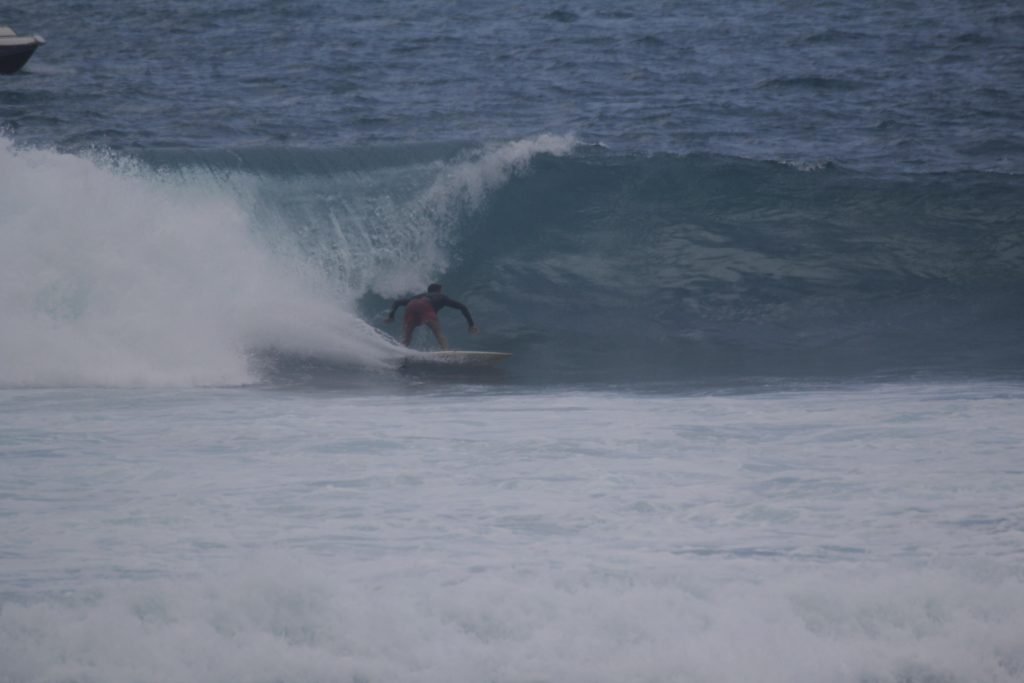 A playful a-frame for all levels, very rarely gets big.
Read more 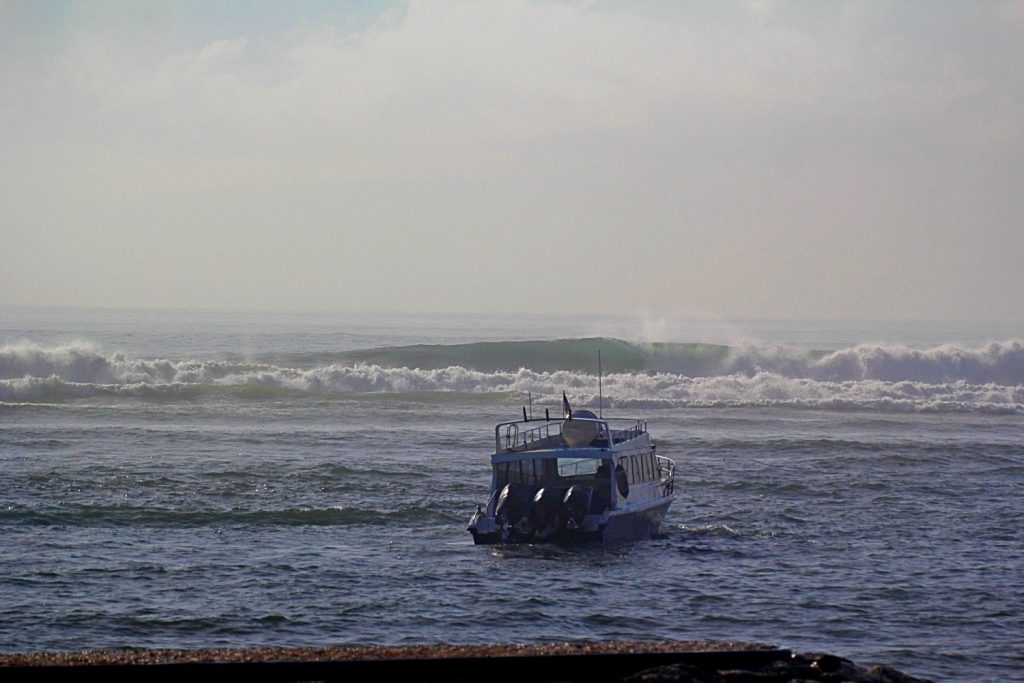 Sanur can offer the best right hand barrel in Bali on its day. Advanced surfers only.
Read more 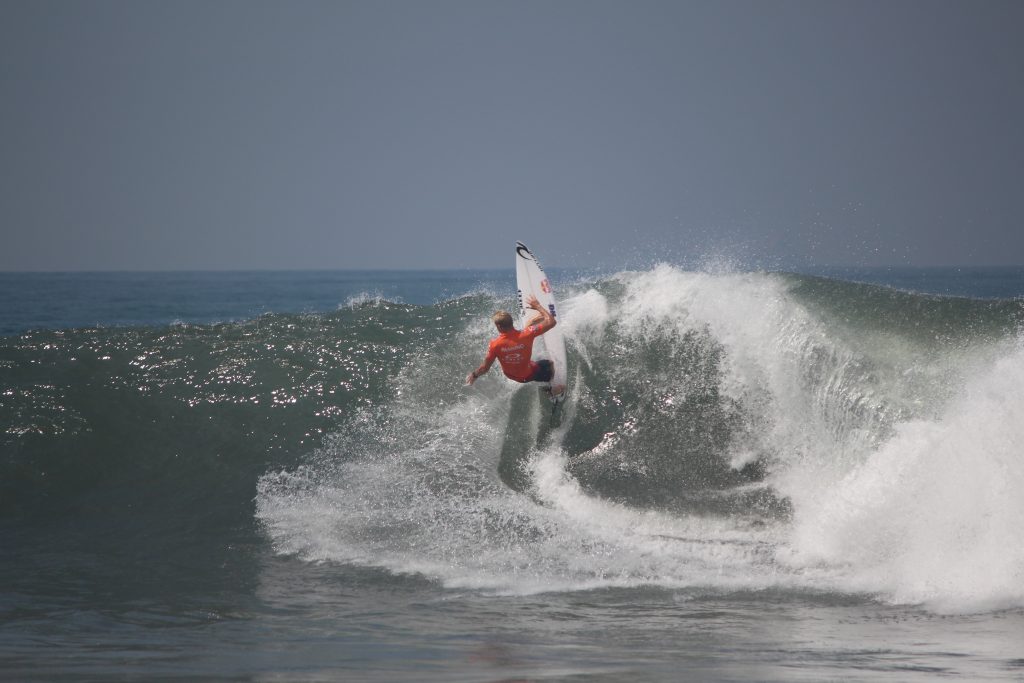 Keramas is one of the most high performance waves in the world. Barrels, turns airs you name it.
Read more

Nusa dua is a long paddle, and a swell magnet. Big, quality right handers for the paddle fit.
Read more 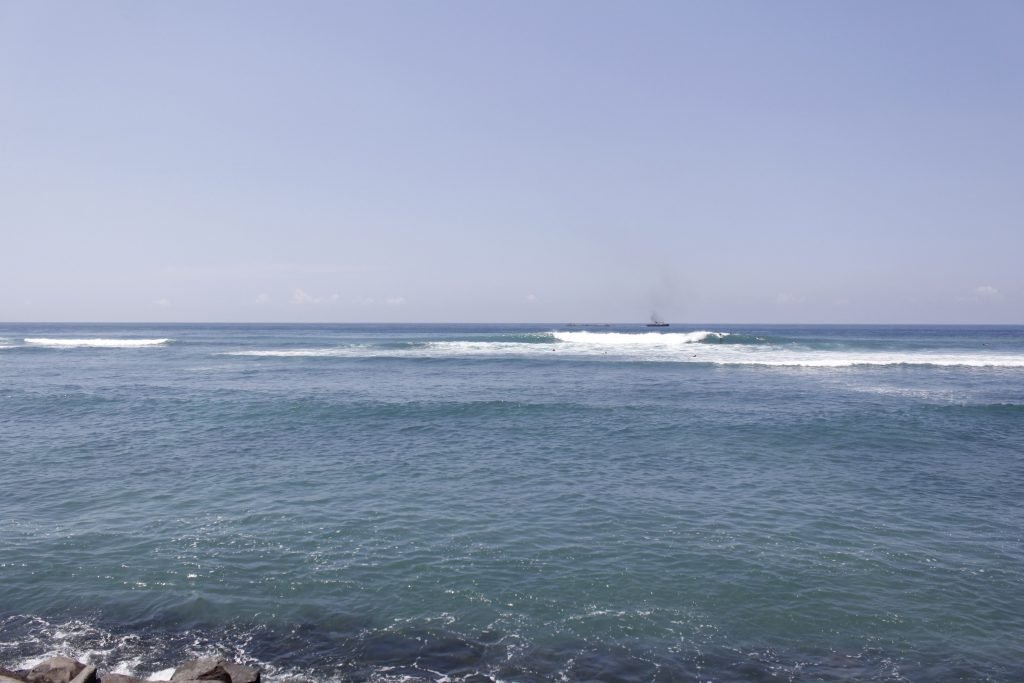 Serangan is your bread and butter in the rainy season. Lots of various peaks to choose from.
Read more

A rare quality right hander that can be great when all the conditions come together.
Read more 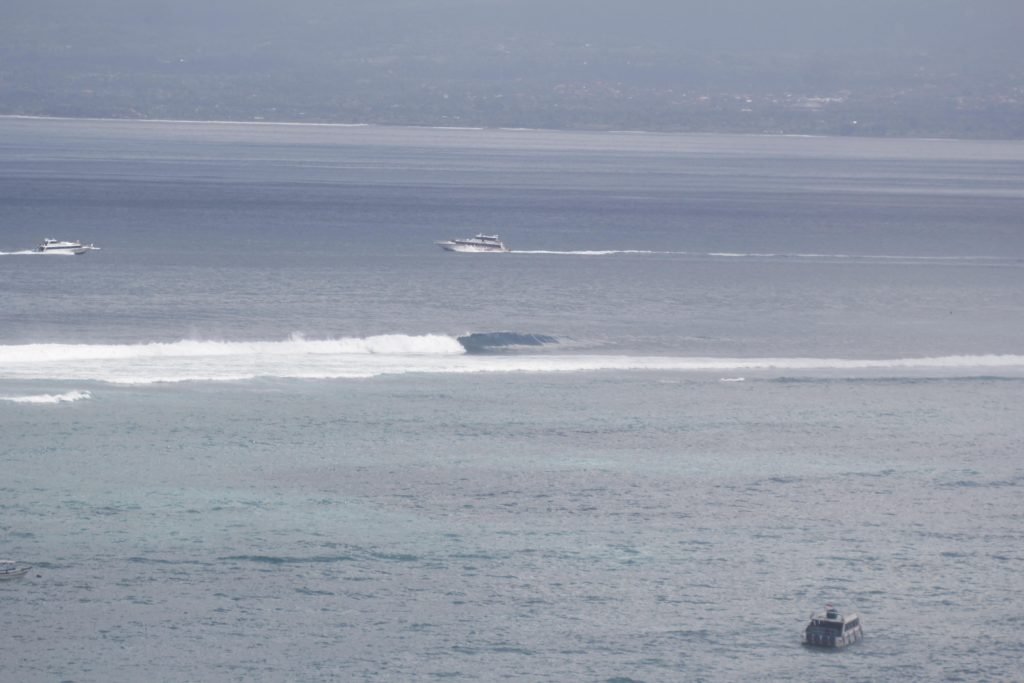 A shifty left hander that is rarely surfed because of its better quality neighbours.
Read more
Previous
Next

The east coast offers wave for all abilities, but predominately the waves are recommended for intermediate and advanced surfers.

There are no lifeguard facilities on the east coast, nowhere to rent boards and often not many people around to confirm that conditions are safe, or help in the event of an emergency. If you are a beginner and are interested in surfing some of these spots, it would be advised to go with a more experienced friend, or book a surf guide who can choose the right spot for the conditions and offer advice as to paddling out and getting back to the beach without incident.

Check out these spots for beginners in Bali.

Short-boards are the best option for most spots along East Bali especially in larger, long period swells. You may find some options for longboards on smaller days at Serangan or Hyatt Reef.

The surf shops in this area are few and far between, with a shop on the beach at Keramas which sells a few second hand boards, and a leggie or 2, and a few scattered through Sanur. It is a better option to head back into Kuta to make any equipment purchases or hires.

Predominantly a wet season coast, Nusa Dua all the way north on the mainland make the most of the wet season NW trade winds from October to March, but waves can be found year round and the mornings during the dry season can be glassy before the wind comes up, and can be a fantastic option for less crowded waves.

The wet season sees smaller, shorter period swells typically as the Southern Hemisphere summer has less storm activity, meaning that waves on this coast that require a lot of swell and NW winds can be quite rare treat.

your best bet to score these waves is in the shoulder seasons, where a long period swell is more likely and the winds are light.

Nusa Lembongan is best in the dry season as the SE trade winds are offshore for the breaks here.

How To Get To East Bali Surf

From the Airport, travel east over the toll bridge towards Benoa Harbour, then follow the signs north toward Sanur/ Gianyar. The overpass, that is suspended over the harbour is T-shaped and you have the option of turning north past Serangan and toward Sanur, or south to Nusa Dua. Be sure to get in the correct lane if you are in a scooter, there is a dedicated lane for scooters on the left hand side that is poorly signed and you can be fined if you are driving in the wrong lane.

NB: cash is required to pay the toll across the bridge, or you can choose the longer roads through Kuta without tolls.

Aproximate driving times from the airport.

Nusa Lembongan: 30 minutes by car + around 30 minutes on the ferry, but this will need to be arranged ahead of time so allow around half a day for this travel.

How Much Is East Bali Surf?

There is a standard distribution of low, mid and high-end options available around Sanur as the suburb is a favourite destination for families and retirees seeking a low-key beach holiday, with a number of large beach side resorts and a large resident ex-pat population. In saying this, prices are typically moderate, not as cheap as Kuta, but less expensive than Seminyak, but typically a bit better value for money and great new restaurants and cafes opening up throughout Sanur village. A very under-rated area!

There are lots of options for food here, from local warungs serving Nasi Goreng and other local dishes for Rp15-25k, to high end resort dining costing US$100 and everything in-between.

Nusa Dua is characterised by high-end all-inclusive resorts within the walled complex. Room rates here can vary from US$50 a night to $1000+. there are cheaper accommodation and food options outside in the surrounding areas. Look around the Benoa area for cheaper places to stay, and local warungs offering cheap food from Rp20k.

The remaining coast north of Sanur up to Candidasa has a comparatively low population density with great options for cheap food starting from Rp15k and local garden and landscaping stores offering fantastic carvings and statues at local prices that line the road toward Keramas. Accommodation is scarce and is really only concentrated around Keramas, although private villas can be hired at a lot of the beaches ranging from US$50 to $1000+ per night.

Nusa Lembongan and Nusa Ceningan have something for every budget, from Rp150k a night homestays back from the beach to high end villas over looking the bay costing $1000 a night plus. Food options are varied also ranging from around Rp35k for a local meal to US$80 for specialty restaurants over looking Mushroom Bay. 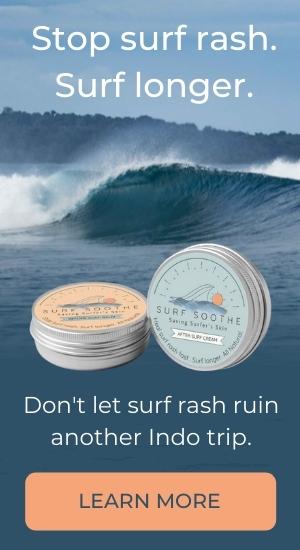 Nusa dua is a long paddle, and a swell magnet. Big, quality right handers for the paddle fit.
Read more

Serangan is your bread and butter in the rainy season. Lots of various peaks to choose from.
Read more

Shipwrecks is a power long right hander that breaks on an offshore reef.
Read more

A playful a-frame for all levels, very rarely gets big.
Read more

Keramas is one of the most high performance waves in the world. Barrels, turns airs you name it.
Read more

A shifty left hander that is rarely surfed because of its better quality neighbours.
Read more

Sanur can offer the best right hand barrel in Bali on its day. Advanced surfers only.
Read more

A rare quality right hander that can be great when all the conditions come together.
Read more

Not sure where to go?

Let our well informed guides direct you in the right direction! just select what you are looking for below.
(These guide will be updated as we release more regions, subscribe to keep updated)

The ultimate resource for surfing in Indonesia.

© 2021 Indonesian Surf guide
All images and information are the property of Indonesiansurfguide.com, unless otherwise stated.
Indonesian Surf Guide is to be used as guide only, and is not liable for any harm or mis-judgments. Please be careful when surfing Indonesia.